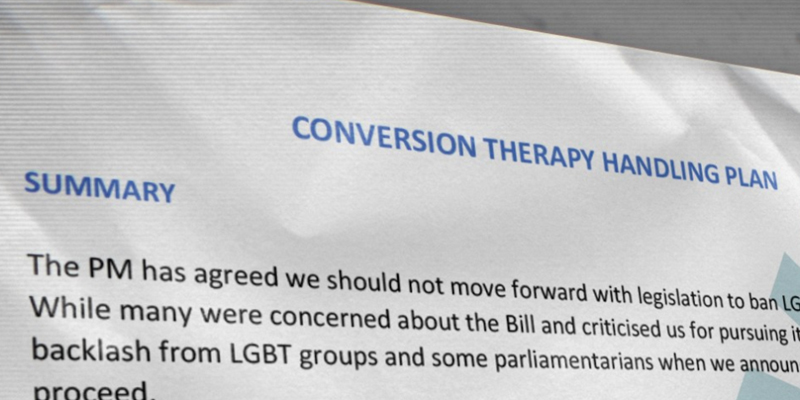 Below is the text of the Government planning document leaked to ITV last week, which explained how plans for a conversion therapy ban would be dropped.

The PM has agreed we should not move forward with legislation to ban LGBT conversion therapy. While many were concerned about the Bill and criticised us for pursuing it, we will face a noisy backlash from LGBT groups and some parliamentarians when we announce we do not intend to proceed.

OPTION ONE – We would ideally announce the decision not to proceed as part of the communications around the Queen’s Speech in early May. This will allow us to position the decision as prioritising our legislative programme, and reduces the risk of looking like we have singled out an LGBT issue. Those disappointed with the decision will be able to se other important pieces of legislation have also dropped away. This would mean allowing the Minister to continue work on the Bill until then.

OPTION TWO – Alternatively, we could announce faster. This would reduce the chance of leaks, but offer us less insulation from criticism. We would need to bring a member of the comms team into the loop to determine the best possible moment to make such an announcement.

The PM has previously committed to banning conversion therapy – what has changed?

Given the unprecedented circumstances of major pressures on cost of living and the crisis in Ukraine, there is an urgent need to rationalise our legislative programme. We are having to take some tough decisions.

Is this another example of the Govt’s anti-LGBT agenda?

We have a proud record on LGBT rights, including:

The Government remains committed to ensuring everyone is […] love who they want to love.

But you’re happy for LGBT people to be subjected to […]

It is important to note, there is already legislation to address acts which inflict physical harm and talking therapies are already subject to regulation through professional frameworks for healthcare professionals.

We will explore whether there are additional non-legislative steps we should take to complement these laws and provide support for victims.

HMG’s own LGBT survey said conversion therapy was a problem?

The survey was not designed to elicit detail on conversion therapy practices and we were not able to conclude whether those who reported being subjected to therapies were reflecting on recent events, incidents in the UK, or to say whether what they experiences was already covered by existing legislation.

HMG commissioned research has shown that the evidence-base for further legislative measures on conversion therapy is weak. The interim findings of the Cass Review said evidence on the appropriate management of children and young people with gender dysphoria is inconclusive both nationally and internationally.

In the Interim report, published in February 2022, Cass said: “There is a lack of consensus and open discussion about the nature of gender dysphoria and therefore about the appropriate clinical response. Because the specialist service has evolved rapidly and organically in response to demand, the clinical approach and overall service design has not been subjected to some of the normal quality controls that are typically applied when new or innovative treatments are introduced. …There needs to be agreement and guidance about the appropriate clinical assessment processes that should take place at primary, secondary and tertiary level, underpinned by better data and evidence.”

In its January 2022 response to HMG’s consultation on conversion therapy, the EHRC said: “[There is a] documented lack of evidence about conversion therapy in relation to being transgender, recent attention and litigation on the implications of medical and surgical transition, and the ongoing NHS-commissioned independent review of gender identity services for children and young people led by Dr Hilary Cass OBE, we consider that these matters require further careful and detailed consideration before legislative proposals are finalised and the implications of them can be fully understood.”

[…]you ruling out future legislation?

OPTION ONE – Yes. The evidence does not support a need to legislate in this space.

[it is?] important to note, there is already legislation to address acts which inflict physical harm and talking therapies are already subject to regulation through the professional frameworks for healthcare professionals.

government is talking – from how issues such as […]

Cass is conducting a research programme to build the eviden[ce …]

While all of those who have expressed concerns about the Bill will come out in support of the decision not to proceed, there are few ‘neutral’ voices who will be willing to raise their head above the parapet. EHRC Chair, Baroness Falkner is likely to be supportive but is reportedly feeling bruised from the directions to her recent interventions in this space.

The Chief Whip’s latest intelligence is that around 40 Conservative MPs are very opposed to the legislation, roughly the same number are very supportive, and the rest have either not expressed or formed a view on the proposals. The Chief Whip, Lord’s Leader and Minister Adams are now being brought in on the decision so they can provide further information on which MPs and Peers require engagement, and to assist in identifying those MPs and Peers who will assist in promoting the Government’s wider work in this space.

CDL or a member of the senior team should first speak to Liz Truss as the responsible Secretary of State. While Liz is not ideologically committed to the legislation she is likely to be concerned about owning the new position, having personally committed to delivering the Bill. That said, her current focus is the situation in Ukraine, and she is keen not to be, or appear to be, distracted by wider issues.

Both Nick and Mike may feel they have to consider their position.

It is possible that a backbench MP could attempt to bring forward their own version of legislation banning conversion therapy in the third session via a Private Members Bill (the Liberal Democrats attempted this in the current session although were not sufficiently high enough up the Order Paper to make progress).

We can expect a great deal of noise in the media as a result of this decision. While the Telegraph, Times, Daily Mail, Economist and Observer have all published editorials expressing concern about the Bill, others will be highly critical. Paul Brand of ITV has followed the commitment’s progress closely for years, he is personally very invested, and is likely to cover the decision in great depth. The LGBT sector are very vocal and we can expect a high volume of critical commentary and campaigning activity. It is possible celebrities may lend their voiced to campaigns to reverse our decision.

SECTOR HANDLING INCLUDING THE LGBT CONFERENCE

Sector leaders will need to be engaged on a one-to-one basis. Ideally this would be done by the Foreign Secretary as Minister for Equality, with either Lord Herbert or Mike Freer (who are trusted by the sector) alongside.

The LGBT sector will read this decision as a signal the Government is uninterested in LGBT issues or in addressing concerns that Britain is a ‘hostile environment for trans people’. We should expect a vocal campaign against the decision. This will make it harder to deliver a successful LGBT conference in June. The domestic and LGBT sector are likely to claim we have lost the ability to speak as a global leader on LGBT rights. We will need to carefully articulate our concerns about the unintended consequences of the Bill and continued commitment to LGBT issues, at home and aborad. It is likely the decision will make it harder to secure sponsorship from corporates, who are cautious of walking into any controversy in this space.

A package of non-legislative measures could include:

[…]the consular service, including how to assist victims.

This package could be complimented by wider LGBT policies whch are already […] improving access to fertility treatment for lesbians, sexual health services […] and monitoring of data on LGBT bullying in schools.

[…] however important to note that none of the […] will argue the non-legislative measures do not constitute […] a bill as ‘anti-LGBT’ …If we wanted to make a […] cutting waiting lists for transgender healthcare services […] . However, this would require a […] of waiting list targets for […]