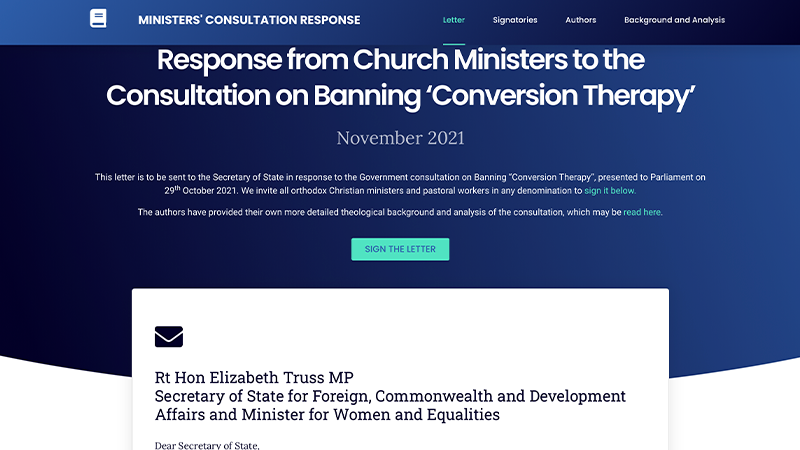 Over 1700 church ministers and pastoral workers have signed a letter urging the Government not to criminalise the ordinary work of churches.

If you are a church minister or pastoral worker, we urge you to sign.

The authors say churches “act in love, with gentleness and respect, for the good of all” but fear that “loving, compassionate exercise of orthodox Christian ministry” could be caught by the current proposals.

Written in response to the conversion therapy consultation, the letter remains open to new signatories, after an extension of the consultation was announced.

…We are grateful to the government for having made clear in the consultation that it does not intend this legislation to impact the normal practice of religion. Nevertheless, we are deeply concerned that the legislative approach outlined would do exactly this.

We see in these proposals a clear possibility that our duty as ministers, of proclaiming the Lordship of Jesus Christ, and calling people to find life in him, which includes living by his laws, will be criminalised. We also believe it could be used against Christian parents who could equally be criminalised for loving advice and teaching given to their own children.

It also notes that these Christian leaders would continue to practice Biblical beliefs as before, even if they were criminalised for it.

…if it were to come about that the loving, compassionate exercise of orthodox Christian ministry, including the teaching of the Christian understanding of sex and marriage, is effectively made a criminal offence, we would with deep sadness continue to do our duty to God in this matter.

Find the full letter here. If you’re a church minister or pastoral worker, you can add your name here.